According to Prof. James Blignaut, a resources economist of the University of Stellenbosch, there is a massive 93% difference between producer and input prices, making it unsustainable to effectively produce the same amount of output.

Prof James addressed a webinar about regenerative agriculture, hosted by Landbouweekblad, last night. He explained that it was important to not only consider the annual rise in inflation, but also the momentum built in this variable.

James added that this was troublesome as it meant that there was no money left to invest in the renewal of equipment, technology, as well as the industry in general.

The consequence of this is clearly visible in the change of debt structure, with the ratio of farm debt to farm asset value, having increased by 24%.

He elaborated on six options to escape the above-mentioned price squeeze:

The following three measures are more viable, according to James:

According to James, producers have to adapt and explore different options to broaden their income streams.

Conventional till or regenerative farming?

He pointed to a study during which a 1 000 ha farm, consisting of 600 ha crops and 400 ha grazing, was modelled. The producer could either continue with conventional till and other production methods or convert to conservation and regenerative agriculture.

The same macro assumptions were applied, with respect to the cost of the farm, implements, etcetera. However, equipment costs varied. With conventional tilling, you have to allow for five replacement cycles over a 30 year time period, whereas with regenerative agriculture, you only allow four replacement cycles. “With the latter, the vehicles don’t work that hard and they work less hours,” James explained. 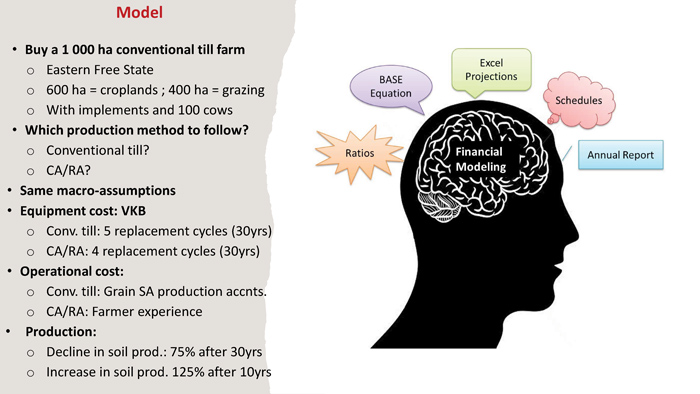 Over a period of 30 years, the cost of regenerative farming has proven to be 85% that of conventional farming, resulting in a difference of more than R300 million.

Soil productivity declined by 75% when conventional farming was applied over the 30 year time period, whereas it actually increased by 125% of the current level, over only 10 years. 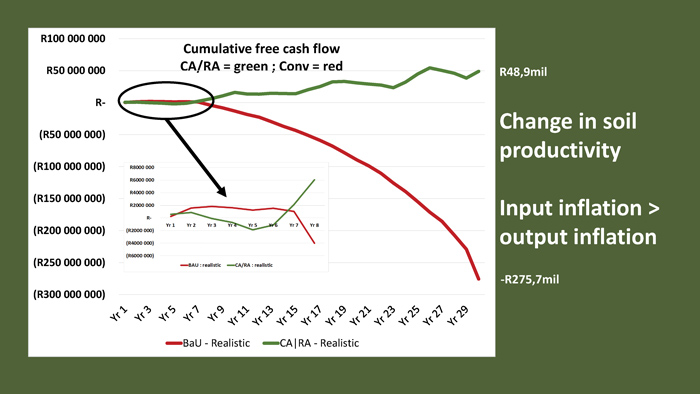 He did point to an initial increase in the cost of regenerative farming, but attributed it to the transitioning phase, allowing for a rotation in the system.

If we were to convert all variables to the relative cash flow per hectare in real terms, regenerative agriculture would result in a net profit per ha of R758 per year, whereas conventional agriculture would imply debt of R3 297 per ha per year. 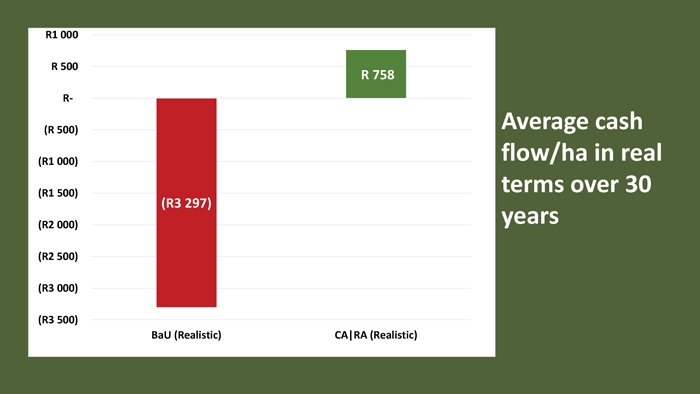 “The momentum that we currently have in intermediate input is so strong that, if it is not curtailed, it might mean the death of agriculture. Conservation and regenerative agriculture does provide a real alternative,” James concluded.